New Release from Elodie Parkes Plus A Bonus

We’re unmasking Tom, the hero from, ‘Love Unmasked, At the Candy Apple,’ today. #MMromance with a twist of fun

Love Unmasked, At the Candy Apple: Elodie Parkes
Handsome Tom Wells sets lonely Scott Palmer’s heart racing as he watches Tom come and go from his apartment across the street. Scott longs to meet Tom, and when he scores a new job delivering goods for a local distributer, fate hands him the opportunity.
Tom works in a nightclub—the Candy Apple, and in the sultry environs, a masked stranger seduces Tom. The seeds of passion are sown, but just who has ignited Tom’s passion?
Scott’s longing to know Tom leads him to join the elite nightclub. On his first visit, the club holds a masquerade event.
Who is kissing who? Who’s under the black velvet mask?
An erotic MM romance, with a twist, and an HEA.

Hi Tom, welcome to the blog
Hi, thank you for inviting me to talk with you and your readers today.

Tell us a little bit about yourself
Well, I’m the bar manager at the Candy Apple. I also serve there. That’s fun, actually.

What’s the club like ... who goes there?
The club caters for a wide cross section of society and every so often, Charlie, the owner and my boss, holds special events. The story features an event.

How would you describe yourself?
You mean looks? Well—tall, dark hair, blue eyes. I like to work out. If you mean personality, I’m a happy person in general, tolerant, accepting...

What do you like in a man as a boyfriend? (He smiles.)
Huh, now I’ve met Scott I won’t be looking for anyone else, but he’s exactly what I do like. He’s around the same height as me, muscled, dark hair, a little longer than mine, gray eyes that are so sexy, and in fact, he’s completely sexy.

Since you’ve fallen into describing Scott, tell us about him
He’s great. He’s loving and caring. He’s clever and works hard. He loves music like me, and working out. He’s special. Scott will always work things out and talk about stuff. I love him.

What’s hot about the story?
Hell, just about every love scene and then there’s the twist. It’s our story, Scott’s and mine ... our journey to love, but even I didn’t see it coming. I guess deep down I wanted love and I didn’t know how much until a few things happened.

Okay let’s have some quick questions
Lights on or off? (Tom starts laughing.)
Either and both.

Jeans or a suit?
Of course that depends on where I’m going. I wear both, doesn’t everyone, but if you’re asking what’s my favorite, it’s jeans.

Vanilla or chocolate?
Can I say strawberry?

Boxers or briefs? (He grins)
I own both styles. Commando’s a favorite in summer.

Favorite music
Not even a chance of answering that because I love so many styles of music, wait not jazz. My dad used to listen to jazz, old stuff. I couldn’t like it.
Sum up being gay in a sentence. (He looks surprised)

Never been asked to do that before. Okay, here goes. I was born like it and I’m cool with it. Does that sound familiar?

He’s laughing now and I know he’s quoted the book, but then again it’s Scott’s and his love story so they’re probably his words in the first place...
Thank you for being here today, Tom.

Thank you for talking with me. It’s been a lot of fun. I was nervous about what you’d ask, but yeah, it’s been good. 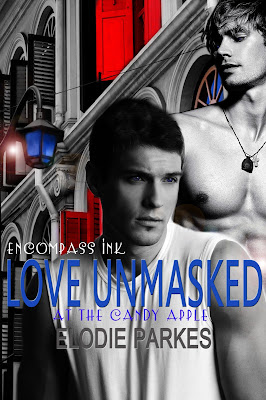 Read a teaser, 18+, from Love Unmasked, At the Candy Apple

The club opened and filled to bursting within half an hour. Tom served and danced along behind the bar to the music. He chatted with customers and other servers. The bass thumped, people swayed and spun on the dance floor. Lights glinted on the sequined and glitter sprinkled masks. A man beckoned to him from the end of the bar and Tom went to get the order. The guy wore a half mask. The black velvet covered his cheekbones and his dark hair curled over the forehead giving him a rakish look.

“Vodka and you.” The man leaned forward to speak so that Tom could hear above the music.

A spike of excitement mingled with surprise. This was a new pick up line and from a guy too. Tom took in the width of the man’s shoulders and his muscled chest beneath the white dress shirt. A black tie hung unfastened around the unbuttoned collar of the shirt and the man held his jacket in one hand.
“Ice?” Tom asked and flashed his eyes at the customer. That look was one he used on guys at the gay bar he went to sporadically.

“Mmm—if I can take it from your lips.”

Heat traveled up from Tom’s balls to his stomach. His cock stirred and lifted. This was a definite proposition and against all his usual rules, desire to risk saying yes filled him.

“Coming up.” He turned to get the drink. His heartbeat quickened as he picked up an ice cube and fit it between his lips. It wasn’t straight from the freezer so it didn’t stick, but the cold sent a shiver over him as he brought the vodka to the customer.

He leaned over the bar counter. Tom expected the guy to take the ice with his fingertips and that would have been sexy enough, but he met Tom halfway across the bar in an open-mouthed kiss to suck the ice cube from Tom’s lips.
A sweep of heated desire flew through Tom’s body and his cock hardened. His eyes closed instinctively and a low sound escaped him as his nose touched the man’s cheek just below the velvet mask. A light woody-citrus scent from the man’s after shave filled his head, and the man’s lips touched his sexily. Their masks rubbed together. A shiver went down Tom’s back. His ass clenched. He wanted this guy’s cock in his hands. If the guy asks to meet me, I’ll break my rules and agree. He drew away.

The guy gazed into Tom’s eyes as he crunched the ice.

Mesmerized by the scorching look, Tom waited, unable to tear himself away.

About Elodie:
I’m a writer who is in love with happy endings, currently based in southern UK.
I love: music, art, flowers, trees, the ocean. I work with antiques by day and words by night. Like a vampire, darkness is my friend, that’s when the silence is only broken by an occasional hoot of owls in the woodlands opposite my home, and I write.
Find Elodie online: Blog  Facebook  FB  Twitter  Tsu  Google +  G+  Pinterest  Blog 2  Tumblr  ManicReaders  Amazon