They thought to bury us. They never saw that we were seeds. Seeds of glass and steel, stronger and more resilient than either.

Hi all, I’m Jackie Keswick. And before I start I’d like to thank Harper for inviting me to visit her blog to talk about my latest release. Healing Glass is a fantasy novel that tells the story of glassmaker Minel, warrior captain Falcon, and a floating city made from magic.

One of the best things about writing fantasy is that I can design my very own world and decide how it works. I love medieval history, so that’s where I started when I imagined the backdrop for Healing Glass. The floating city came next, and once I knew how it looked, I also needed to find out how it worked. How do a large number of people live safely in a floating city?

I imagined it a bit like early medieval cities, where not every house had a kitchen or even a fire, and food and company were found in cookshops and taverns. Which, predictably, made me think about food.

I love writing about food, and there’s often far too much of it in my stories. Healing Glass, with its medieval setting, was a lovely challenge when it came to working out what my characters would eat. What did people in medieval Europe eat? First and foremost, bread. But also stews, pies, and a lot more meat and fish than we might think.

Minel’s work, making and enhancing glass, often leaves him ravenous and very thirsty, so I got to play with food. Minel loves wine, tries to make his own beer, and when he’s designing he loves to nibble on ferociously hot, pickled chillies…. He also loves nougat, which I was surprised to learn was actually available in early medieval times. And if this discourse made you look forward to dinner, then how about a sneak peek at one of the meals Falcon puts together for Minel.

Minel is dying and has decided not to seek a cure. He avoids company as he avoids food, until Falcon turns up in the city to look after him. Here, they’ve just shared their first kiss and it makes Minel question his decision not to fight his illness. And if that and Falcons’ dinner don’t perk him up, then I don’t know what will… 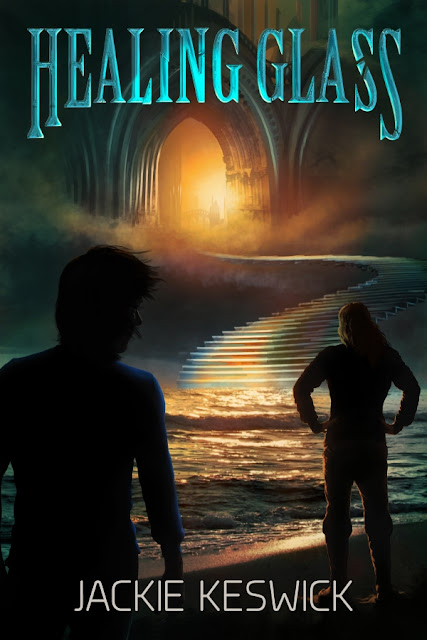 
An ancient, forgotten accord.
And two gifted men caught in a web of greed and dark magic.
Despite belonging to different guilds, glass master Minel and warrior captain Falcon are friends. Their duties keep them apart, but when Minel falls ill and chooses death rather than the only known cure, nothing can keep Falcon from his side.
As their friendship grows into more, old wrongs and one man’s machinations threaten the floating city and leave both Minel and Falcon fighting for their lives. Can they learn to combine their gifts to save the city and its magic, or will everything they know and love perish before their eyes?
Healing Glass is an LGBT fantasy adventure with its head in the clouds. If you like medieval backdrops, impressive world-building, three-dimensional characters and a touch of magic, then you'll love Jackie Keswick's socially-conscious adventure.
Buy Healing Glass to visit the floating city today!

The men who walked in Falcon’s wake brought food and arranged it neatly on the large table on the edge of the terrace. A tureen of soup wove its delicious flavour into the gentle breeze. Colourful salads teased his appetite. Small dishes of braised vegetables and broiled meats invited him to sample and taste. There were also sweet and savoury pastries, fried chicken, pickled plums, ripe peaches, and even a bowl of sorbet, set into a dish of salt to keep it frozen. Falcon had chosen several wines to accompany their meal and, for once, Minel appreciated that he couldn’t get drunk anymore. He loved wine and now he had a chance to try more than one at the same meal.

Yes, Falcon had outdone himself. He looked after Minel as he’d promised, and he only grew fierce when he spotted signs of Minel not taking care of himself.

Minel deserved those fiery glares. He’d been avoiding food as he avoided people while he came to terms with his own mortality.

He was just four and twenty, had only left the floating city to visit the woods that stretched at its base, and the villages and towns along the coast. He’d not travelled to see the mountains that lay beyond the forest, or the desert that lay behind those. He’d never thought he’d die before he’d explored every part of their world, in person or by proxy. He’d not yet read all the books he wanted to read, hadn’t drawn and studied all the plants and minerals that could be used to protect and help and heal, that could make his designs so much more powerful.

He had so much yet to learn, hadn’t yet turned into the craftsman he knew he could become... and leaving that journey unfinished hurt.

So he turned to the one man who might understand when he asked about regrets and unfinished tasks, whose gifts and training ensured that he walked in close company to death more often than not.

“Falcon... do you think there’s a moment when a man is ready to die?”

ABOUT JACKIE AND WHERE TO FIND HER