First and foremost, it is a pleasure to have you here.  Welcome to Harper’s Sunday Brunch Spotlight!

1.      So, can you tell us what makes Elodie Parkes tick?  What got you started on the path to becoming an author?

I used to tell my school friends stories I had made up and they loved them. I had a couple of things published in teenage magazines and I think it just sparked the idea that I could write something that would entertain.  I stopped writing for some time when life intervened but began writing again a few years ago.

2.      What are you currently working on?  Would you care to
share a snippet?

I’m working on a new romance. It’s written and put to sleep for a few weeks before I do an edit and then send it to my editor. It’s a little more paranormal and darker than I usually write but the idea came to me after I visited an old building. I was sent to look at a couple of antiques in a building scheduled for demolition and rebuild. The place was very spooky and then suddenly this guy appeared. He owned the place and showed me the items for sale. He was very attractive. (Smiles)

The title is, The Old Star,
Snippet: Where my lovers meet


The man turned around and Cathy’s heart flipped. He was quite simply the most attractive man she had ever seen. He walked halfway down the room and stopped.
“Who are you?” His voice was low, husky, and as attractive as he was.
Cathy’s mouth was dry from fear and her instant reaction to this man.
“I’ve just rented the place. I’m sorry I know this floor is off limits, but the front door was open and I thought…” She improvised what was a lie in reality.
The man approached her and her words trailed away as she took in the sight of him.
He was tall and muscular. His T-shirt wasn’t tight but showed his body to be hard, and Cathy had the most astonishing urge to go to him, and run her hands up underneath it to feel his skin. His hair was dark and untidy in a way that was endearing to her. His eyes were a shade of dark blue she hadn’t seen before. He couldn’t be called handsome because that just wouldn’t do him justice. He was strikingly attractive. The shape of his face, jaw, nose, all added up to make a sight Cathy registered as dreamy. He was a hunk, gorgeous, sexy, and desirable.
He stood at arm’s length with the paintbrush in his hand. Cathy gazed at him and he smiled. It was a lovely smile and disarmed Cathy even further. She began to back away. The man shook his head.
“It’s okay. You haven’t done anything wrong. I’m surprised to see you, but this is good. I didn’t know that the place had been rented out.” His eyes held a curious expression. Cathy instinctively knew something about what he said wasn’t quite true, but he wasn’t angry and he smiled again.
Cathy smiled back.
“Cathy Faraday and you are?” ‘He’s probably some tradesman the owner has employed and neglected to tell Alfred about.’
“Owen Sheringham.” He gave her a look that said this was all he was telling her. The look had authority, and Cathy suddenly thought he could be the owner of the building.
She nodded and backed away a little. Glancing behind her, she gestured to the door she had entered and noticed that there were three doors. They were at intervals in the same wall and Cathy stared at them.
Owen followed her gaze and waited.
Cathy became aware of his waiting. It was tangible. She gestured again at the door she felt sure she had entered by because it was at the end of the room near the big back windows.
“I’ll get going and let you go back to work. I only dropped by and need to go back to my office.” She heard her own voice waver, and it was all she could do to keep herself from turning and running. She reached the door and yanked it open, not realizing it had closed behind her.
Beta snippet copyright Elodie Parkes 2013

3.      Do you include some of your own personal experiences in your books or do you prefer to use your imagination?

My books are often sparked by real experience. When I meet someone or go somewhere, see a person in the street or even a signpost. This sort of thing just drops an idea into my head and the next thing I know I’m writing a story.

5.      Do you have a specific process or a ritual you go through when sitting down to write?

No, I just run at my laptop when I have the time and write.

6.      Where do you find your inspiration for your plots?  Do you have any tricks of the trade you would care to share?

I have no secrets at all. The stories just happen for me. I am inspired by people and life in general. I write what I hope are happy stories, to lift a reader up a little, to show some love in often a loveless world.

7.      What is the oddest place/situation where an idea for a book has come to you?

I guess driving past a country road where a sign for a workshop to let was put on the grass verge.

I read all kinds of things. All kinds of genres. I will read a blurb and it takes my fancy and that’s it I’ll read the book. I honestly don’t know why.

9.      We all have our favorite authors.  Can you share some of yours and tell us why you like them?

I read so much and have read thousands of books I guess. Lately I’ve read away from my own genre. I’ve always read detective. or mystery type books amongst others. So I could name Ruth Rendell, Robert Goddard.

I think mine change actually. I had to think about this question for a time, and I guess at the moment, I’m tired of seeing drivers speed in car parks. That sounds weird, (smiles).
Oh wait, I’ve just thought of one. You buy something and love it, next time you go to the store it’s discontinued. LOL

11.    When you’re not writing, what are the things you enjoy
doing to relax?

I read. I go off into the countryside. I watch movies.

Thank you so much for joining me here today, Elodie.  I know my followers will enjoy this spotlight as much as I have conducting it.  Good luck on all your future endeavors.


A LITTLE ABOUT ELODIE

Elodie Parkes lives in Canterbury, United Kingdom. It’s famous for the Cathedral, Chaucer, and there is a UNESCO world heritage site, which includes the ancient ruins of St Augustine's Abbey and St Martin's Church. There is also a ruined castle. It’s a pretty place too and the coast nearby is great.
She work in an antiques shop and writes. She has two dogs that keep her fit with their need for walks.
Elodie writes romance, contemporary and erotic with a twist of magic, paranormal, mystery or suspense. She likes to make the story unusual in some way, by a quirk in the tale.


FIND ELODIE ONLINE AT THESE PLACES! 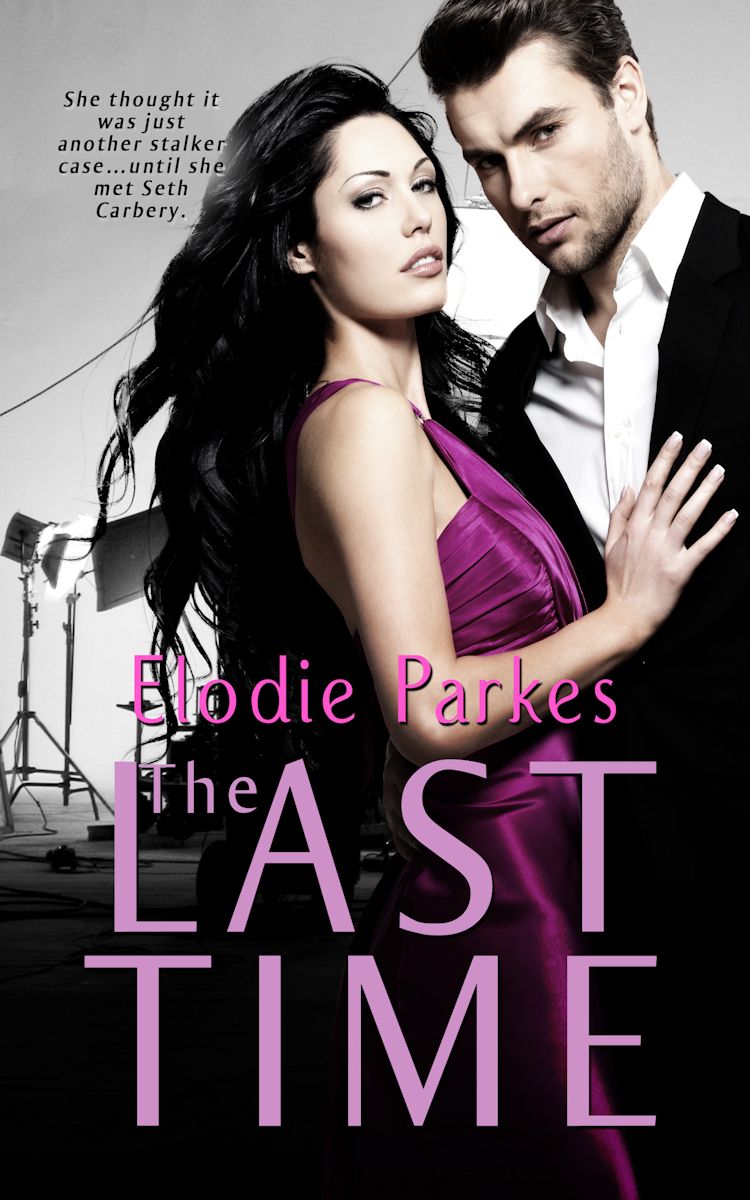 Purchase Link for The Last Time


Actor Seth Carbery swears he will never fall in love again, that is until he meets private detective Bethany Snow.


Something strange is going on. Seth and other members of the movie cast and crew are receiving threatening letters, but no threat has ever been carried out... yet. Bethany Snow is sent on location by the Black Agency to investigate, and guard Seth Carbery against danger.


The case is not what it first seems and even when Bethany thinks it could be over, a new twist means she becomes a target.


Seth and Bethany find they can’t keep their hands off each other.


Who is sending the letters and why? Does Seth have a secret admirer or stalker?


Excerpt from The Last Time
She looked up into his eyes.
“We have webcams up and the program we use can be set to watch nighttime activity,” she said softly.
Seth’s eyes darkened at her and his gaze was dreamy.
“You’re kidding, what if a cat walked by?” He moved slightly closer to her as they stood by the table.
“Oh the heat signature wouldn’t register enough to set the alarm off,” she answered, and she leaned slightly towards him.
Seth looked a little amused. “So I can’t go anywhere at night without you bursting out of your trailer? You do know I work far into the night sometimes?”
He was very close to her now. “We wouldn’t have that part of the program set at those times. I can explain everything to you some other time. Right now, it’s very late, and you have to be on set tomorrow. I’d better go.”

Seth didn’t want her to go. He was desperate to kiss her. He looked into her blue eyes, and then at her lovely mouth and creamy skin with its sprinkle of freckles. He reached out a hand and gently held her face. He watched her face for signs of rejection. There was only welcome. “It’s already tomorrow,” he said, and he kissed her.


FIND, THE PICNIC, A SHORT BY ELODIE IN THIS ANTHOLOGY BY
MOON ROSE PUBLISHING 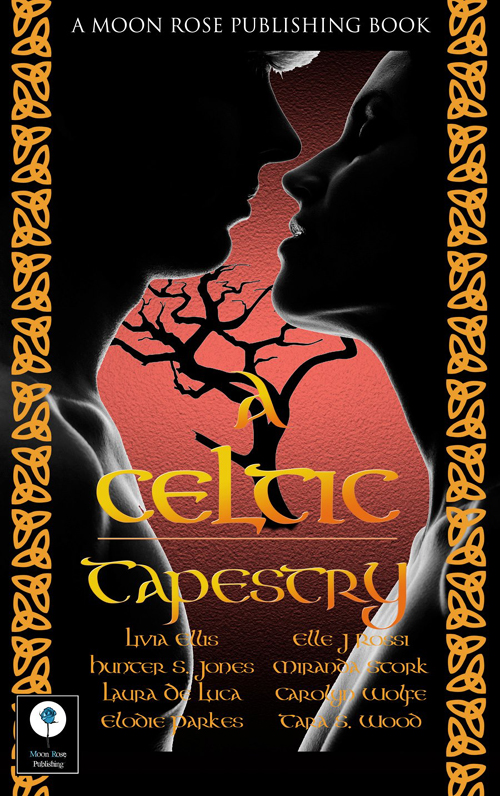 Purchase Link for A Celtic Tapestry


Ava McCartney relaxes from her stressful job by walking in the woods. One day she chances upon Morgan Green. He's hypnotic in more ways than one and Ava doubles back to take another look at him. A mystery man, an enigma, sexy as hell, Morgan just might be the man Ava longs for.


Morgan discovers his home is under threat from developers, and decides to fight back.


His beauty and gentleness hide a powerful man. Who is he really?

To Be Released July 2013 by Hot Ink Press
The Winter Girl by Elodie Parkes
Lily Prescott is only just over a relationship break up when she decides to take up residence in a house left to her by her recently deceased grandmother. Her corporate law job takes a back seat as she licks her wounds in the small country town. She looks around the main shopping street and discovers people who will befriend her, but she also runs into the town’s most eligible bachelor and secret bad boy, Starr Forrester.

Loved for his lifelong association with the town, Starr hides his methods for staying single well from his friends. He’s nearly thirty, gorgeous, a designer, owns a business and on the lookout for his ‘Winter Girl’…

Will it be Lily? What is a ‘Winter girl’?

Fun, sex, romance and a little twist of the paranormal, makes this a must read.