CONGRATULATIONS TO ELODIE PARKES
ON HER TWO
NEW RELEASES! 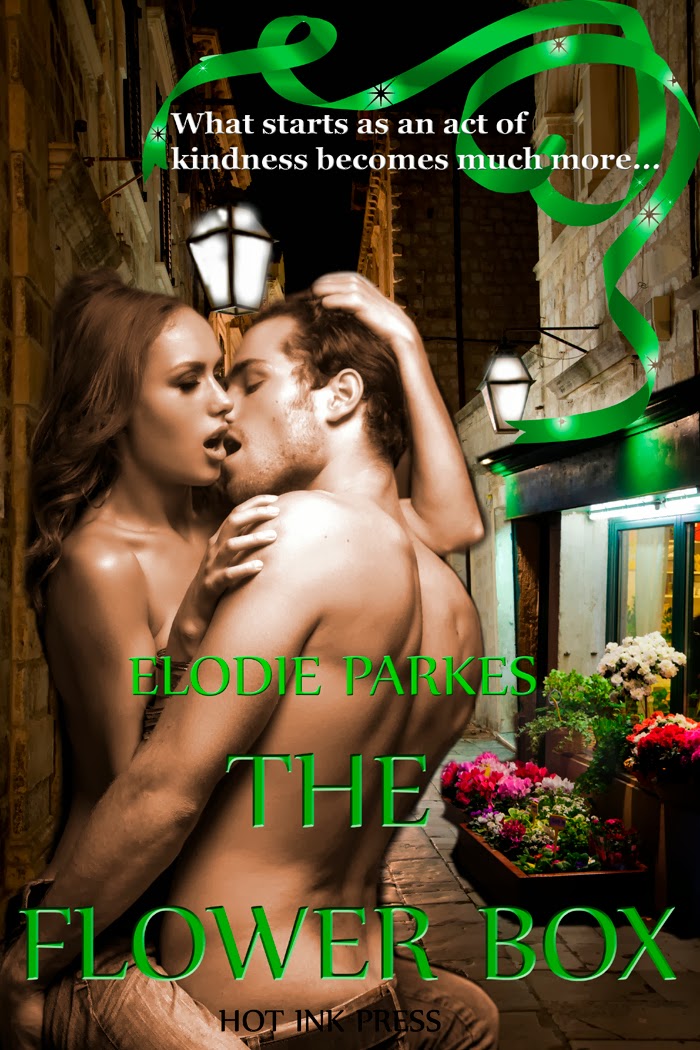 Alice longs for love. Oliver wants to give her flowers and candy until he thinks she has another lover. Will his jealousy drive him away from Alice or straight into her arms? 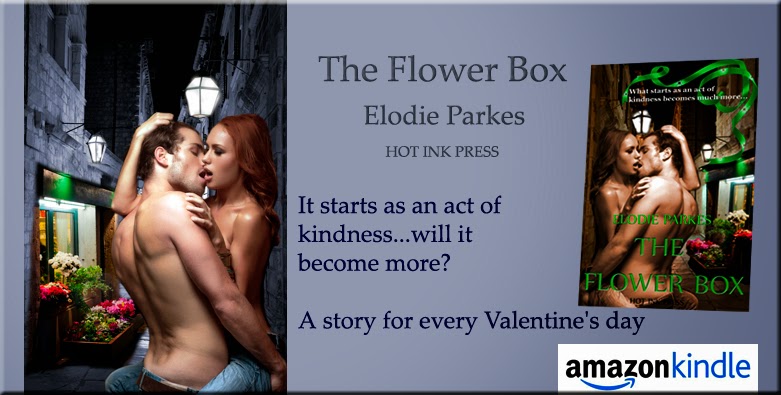 An Excerpt from The Flower Box

She pressed her neck against his face as he sucked.

He pulled her skirt up around her waist and kissed up to her ear. “I want you,” he whispered into her ear and she gasped. Oliver pushed her pantyhose down around her thighs. He kissed her lips, and felt her part them to moan as he slid his hand between her legs. She was wet and his cock jerked. His breath came in short gasps as he pushed two fingers into her pussy. The feel of her inner muscles around his fingers sent a spike of sensation through his cock. He thought he’d come right then as his hips thrust in response to her opening her legs wider for his hand. He murmured against her mouth. “You feel so good. I can’t wait to get you home.”

Alice kissed him. “Let’s go. I’m desperate for you.”

Her words made his cock leak. He wondered if he could make it to her car. He took his fingers from her pussy and lingered with his fingertips against her clit.

She held his shoulders and kissed him hard.

Oliver took his fingers from her clit and rested his face against hers. “Sorry, Alice, does anyone else use this path?”

Her voice was low as she answered against his cheek. “Not usually.”

He hugged her. “That’s good.” He moved from her

She made a little sound as he pulled her pantyhose up.

He held her face and kissed her tenderly. “Let’s go.”
Copyright Elodie Parkes 2014 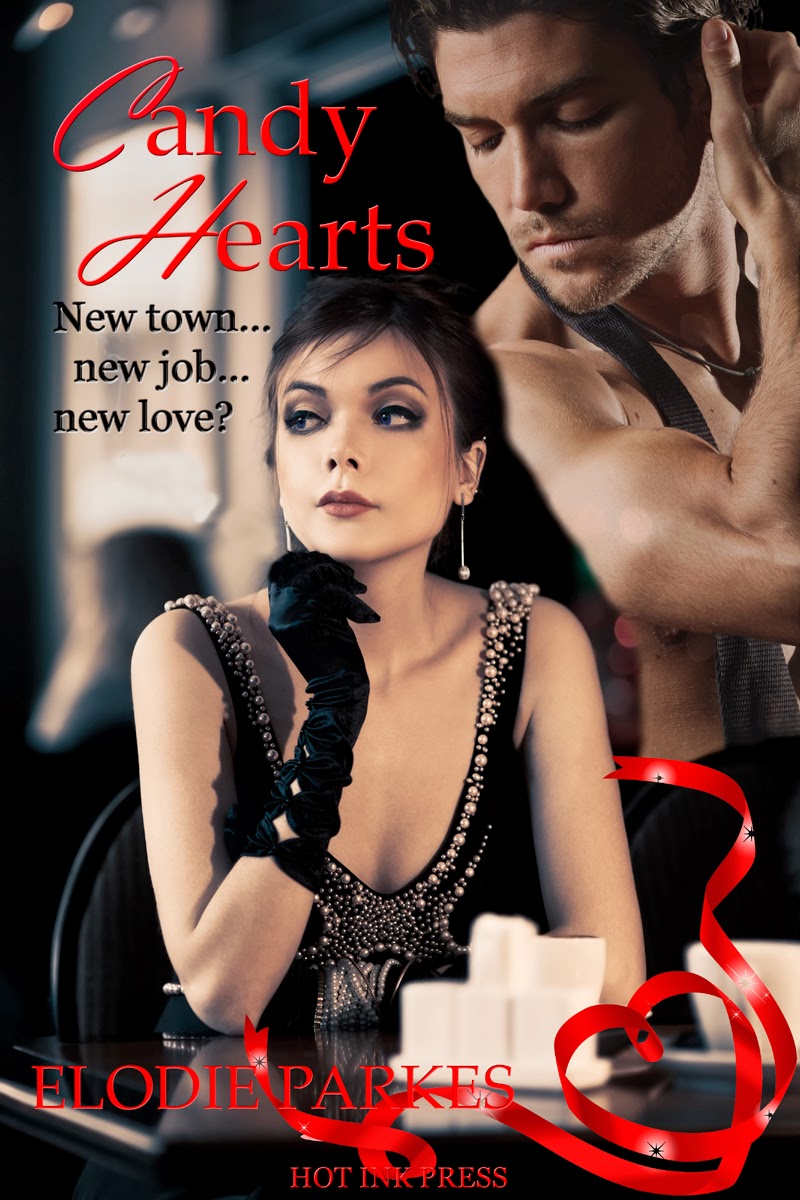 Tom found a new job, but can he find love?
Working in a surf coast hotel seems like the remedy for his previous unhappiness, but as Valentine’s Day approaches, Tom realizes he’s lonely, and looks around for someone to love.

An Excerpt from Candy Hearts

She watched him closely.

Tom saw her gaze trace his mouth, then his body. The atmosphere between them charged as she broadcast attraction signals. He edged his hand along the tabletop so that he might touch hers when she reached for her water glass.

It happened as they stared at each other.

Tom’s cock hardened as the prickle of desire flew along his arm from her touch. He saw her eyes darken and she leaned into him. He took hold of her hand then, locking fingers with hers. He had to kiss her. He raised his other hand, slid it gently along her cheek, and brought her head to his.

The kiss was devastatingly sexy. His cock, rock hard now, pushed at his suit pants. Sky’s lips parted for his tongue. He kissed her, and the steady hum of the restaurant guests’ chatter receded. Surrounded by the scent of her silky hair and softness of her skin, Tom took his time. He held her head to his until he felt her try to move from the kiss, away from him. He let her end the kiss, but he tightened his grip on her hand. As he lifted his head he realized their food had arrived and the server waited by the table for them to end the kiss. He smiled and let go of her hand.

She smiled too leaning back so that the plate could be placed on the table in front of her.

As they ate little bites of their steaks, Tom again asked for her real name.

He swallowed. “I’d love to know your name. Seriously, after that kiss, I can’t keep calling you Sky.” He saw her hesitate, and then she answered.
Copyright Elodie Parkes 2014

1. Candy Hearts was originally going to be titled, A Piece of my Heart. I changed it as I realized the importance of the hearts in the story.

2. Amber, Tom’s ex, in Candy Hearts was originally called Susie. Then I realized there’s a Susie in my book The Winter Girl.

4. I very nearly had a male rival for Oliver in, The Flower Box and then decided it wasn’t much of a twist and I do like my twists so I changed the story.

5. I designed five covers for The Flower Box and couldn’t decide which one I liked best. Even now, I’m not convinced I chose the one with the right color scheme. I always do that to myself, design heaps of graphics, and then can’t choose. (laughs)


A LITTLE ABOUT ELODIE
Elodie Parkes lives in Canterbury, United Kingdom. It’s famous for the Cathedral, Chaucer, and there is a UNESCO world heritage site, which includes the ancient ruins of St Augustine's Abbey and St Martin's Church. There is also a ruined castle. It’s a pretty place too and the coast nearby is great.

She work in an antiques shop and writes. She has two dogs that keep her fit with their need for walks.

FIND ELODIE ONLINE AT THESE PLACES