First and foremost, it is a pleasure to have you here. Welcome to Harper’s Sunday Brunch Interview!
It’s a pleasure to be here, Harper. Thank you for having me.

So, can you tell us what makes Chuck Lovatt tick? What got you started on the path to becoming an author?
Oh I’ve always loved writing. I started way back in the early 80’s, writing my first novel longhand. Of course it wasn’t very good, and there wasn’t very much encouragement besides, so I tried to pretend that writing wasn’t very important to me. Still, not very good writing has its own value, in that it shows what you have to do to improve. So I puttered away for the next twenty years, gradually getting better and better, but never taking it very seriously. Then I met my friend, Amber Clark, who actually valued what I did. Even more important, I valued her opinion. It was like this crucial part of me, that had been lost for all those years, had suddenly, and at long last, fallen into place. It makes all the difference in the world, having someone believe in you, who thinks that what you’re doing is worthwhile.

What are you currently working on? Would you care to share a snippet?
You caught me in one of those rare instances when I’m between projects, so I thought that I would share the first few paragraphs of the novel I was most recently working on a few weeks ago, Josiah Stubb, ironing out the last few wrinkles before its release at the end of this month. So stay tuned, everyone, it won’t be long now!

The cover art isn’t finished, and of course there aren’t any links yet, but if I may, I thought that I would start with Josiah’s blurb: It is 1758 and the siege of Louisbourg is raging. The military might of the British and French empires collide in a desperate bid to control the key strategic fortress and, in turn, Quebec and French-held North America.

One man caught amidst the bloodshed is the young grenadier, Josiah Stubb. Raised by a whore amidst poverty and incest, Josiah seemed doomed from birth to a life in the gutter. His attempt to leave his sordid past behind leads him to Louisbourg, but it comes back to haunt him in the form of a gifted officer, battling his own inner demons.

As the siege blazes towards its inevitable bloody climax, will Josiah live to overcome the formidable obstacles that keep him chained to his past, or will his aspirations for a better life die with him on the brooding shores of Ile Royale?

First a little setting is required: A British armada lies just offshore of Louisbourg, on what is now Cape Breton Island. The story begins with the landing boats going in…

Under a graying sky, Kennington and Halifax continued popping away with their broadsides, the blasts echoing off the shore, reaching us flat and muted in the early morning wind. We watched them with a measure of hope, as the tongues of flame stab, again and again, in the uncertain light, each of us praying with forlorn anxiety that the navy would actually manage to hit something for a change.

On board our barge, I watched as its prow heaved in the violent swell, for some reason reminding me of Fat Sally’s chemise.

Odd how the mind works: here I was sailing into the teeth of the French defenses along with the rest of my mates, and also like the rest of my mates, feeling green as grass while our stomachs heaved right along with the boats – partly in fear, but mostly due to those blasted waters off the coast. Odd that I should think of her now, or think of her at all, really, but her chemise did tend to heave up and down quite a bit, especially when the lads were on the town with a few coins to spare; and although not wooden in any way, shape or form, it had to be admitted that Fat Sally was quite as ponderous as a ship of the line, let alone a barge.

Yes, it was odd, but like I said, I was afraid, and I’ve heard from many of the older hands that it’s only natural to think of your mother at a time like this.

Do you include some of your own personal experiences in your books or do you prefer to use your imagination?
A little of both, actually. Some of my characters are based on people I’ve met, or bits of several people. But personal experience plays such a large part of our lives, I don’t think it’s possible to say with absolute certainty where that ends, and the imagination begins. I just follow where the story leads me, and don’t think too much about where it came from, only where it’s going.

What genre do you typically write in and why did you choose this over others?
Funny, I’ve written a great many short stories over the years, some winning awards, but without exception, they’re all literary fiction. Yet when I sit down to write a novel, I invariably turn to historical fiction. Why? Darned if I know. It’s people that interest me more than anything. I write about them dramatically, or with humour. Both are equally appealing.

Do you have a specific process or a ritual you go through when sitting down to write?
Not really. I just do my best to keep distractions to a minimum: disconnect the phones, make sure the cats are fed, that sort of thing. If the neighbour’s dogs are barking, I’ll turn the radio on low, which I daresay is not the way Classic Rock was ever intended to be listened to, but it works for me.

Where do you find your inspiration for your plots? Do you have any tricks of the trade you would care to share?
Plots? Oh no, nothing so grand as all that. I make it up as I go along! Every once in a while, I will work on an outline, but it’s just for kicks and giggles. It’s as though all my characters gather ‘round for a look, share a good laugh, and then off they go, to do precisely what they please! So far it seems to be working, though. My debut novel, The Adventures of Charlie Smithers, has made appearances on the best sellers list of three countries on Amazon. It’s currently #16 in African historical fiction in the US, and #20 in Canada, for Single Women of all things!

What is the oddest place/situation where an idea for a book/plot has come to you?
I was driving along the highway north of the small town where I work, when I came to an intersection, turning onto the Trans Canada. Just prior to easing into traffic, I checked to see if anyone was coming. As luck would have it, there was a car with British Columbia license plates drawing near, so I had to stop. British Columbia is three provinces and a thousand miles to the west of Manitoba, where I live, and I found myself thinking, “What are the odds that this person and I should meet here, at this exact place and time?” That was the first seed of an idea that resulted in a pretty good short story, The Mathematics of Fate. It was published a few months later.

What makes a book stand out and perk your interest?
The quality of the writing. When that’s working, the plot is of a secondary interest to me. I just want the story to go on and on.

We all have our favorite authors. Can you share some of yours and tell us why you like them?
I would have to say that my absolute favourite was George MacDonald Fraser, the author of the Flashman books. His research was meticulous, his wit razor sharp, and his humour as irreverent as only the best humour can be. And underneath it all, you can discern a deep and unapologetic pride of when Britain was in her glory during the Victorian era. I admire that, especially since it has become fashionable to think otherwise. It takes guts to go against the flow, and stand up for what you believe in.

My next favourite would be Stephen King; not so much for what he writes, but how he writes. It’s so relaxed. He’s never afraid to meander, seemingly off topic, for page after page, and then gradually knit, what appears to be a literary walkabout, back into the story so seamlessly you’re there before you know it. Most writers wouldn’t even attempt to do that (and I’m one of them), but he does it without even breaking into a sweat.

We all have a pet peeve, care to share yours?
I daresay one of my greatest pet peeves is the same as it is for the vast majority of authors—there never seems to be enough time to write!

When you’re not writing, what are the things you enjoy doing to relax?
I’m an avid (read: ‘rabid’) fan of Canadian football—a game much like American football, except for a larger field, twelve men on either side, and only three downs from scrimmage, as opposed to four in the US. But I really couldn’t call it relaxing: my favourite team, the Winnipeg Blue Bombers, have found a way to break my heart, over and over again, for the last twenty-four years (and counting.) So, barring that, what I do find relaxing is reading a good book (heavy emphasis on ‘good’).

Thank you so much for joining me here today, Chuck. I know my followers will enjoy this spotlight as much as I have conducting it. Good luck on all your future endeavors.
Thank you, Harper! The pleasure was all mine.


A LITTLE MORE ABOUT CHUCK

CW Lovatt, is the award-winning author of numerous short stories, as well as the best-selling novel, The Adventures of Charlie Smithers. His second novel, Josiah Stubb, is due to be released in a few weeks time.

WHERE TO FIND CHUCK ONLINE 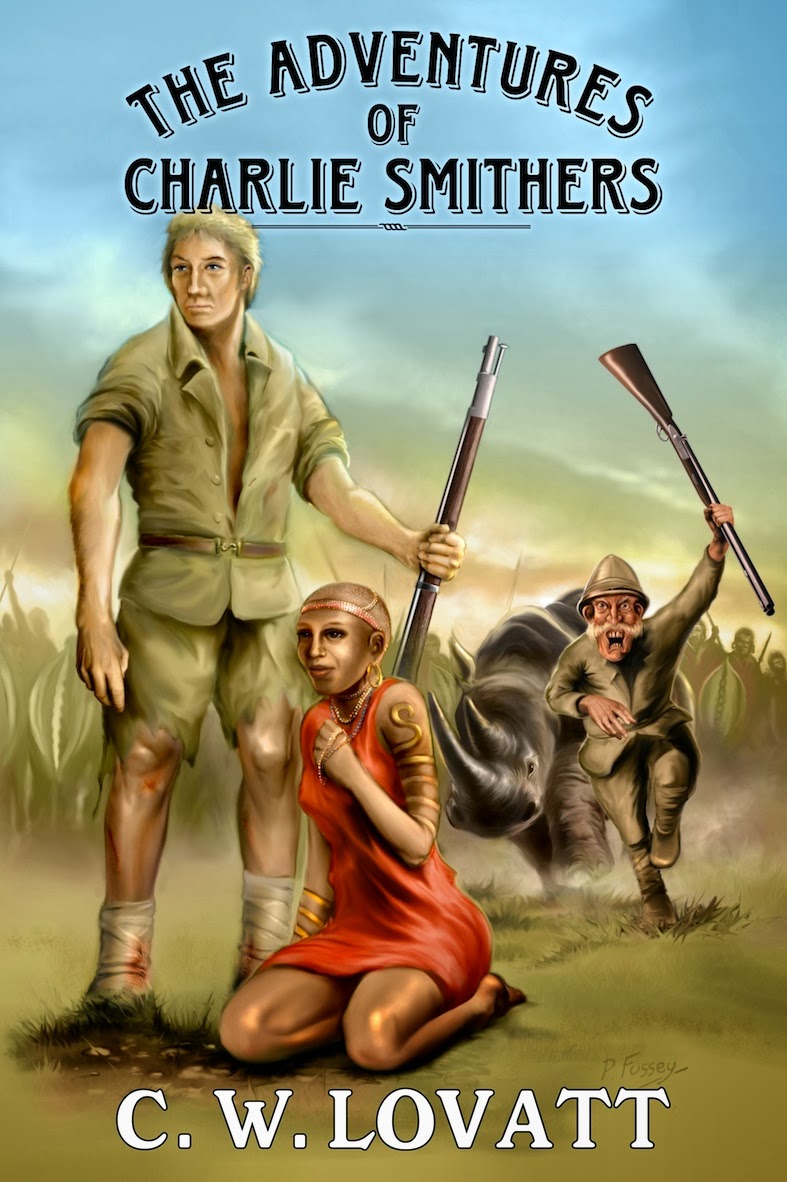 The time is the nineteenth century. The place, the Serengeti Plain, where one Charlie Smithers—faithful manservant to the arrogant bone-head, Lord Brampton (with five lines in Debrett, and a hopeless shot to boot)—becomes separated from his master during an unfortunate episode with an angry rhinoceros, thereby launching Charlie on an odyssey into Deepest Darkest Africa, and subsequently into the arms of the beautiful Loiyan…and that’s where the trouble really begins.

Maasai warriors, xenophobic locals, or evil Arab slavers, the two forbidden lovers encounter everything that the unforgiving jungle can throw at them.

PURCHASE LINKS FOR
THE ADVENTURES OF CHARLIE SMITHERS