AUTHOR/SCREENWRITER
STUART LAND
IS JOINING ME FOR
SUNDAY BRUNCH TODAY

First and foremost, it is a pleasure to have you here. Welcome to Harper’s Sunday Brunch Interview!
Thanks for such a warm welcome, Harper. That spotlight is bright…and kinda hot. Hey, this stuff looks good. Do you mind if I eat while we talk? I missed breakfast.

What got you started on the path to becoming an author?
I blame it on a disastrous love affair. She was the love of my life. My whole universe crashed to a halt. Birds stopped singing. I trudged home and spent an unknown number of hours writing down the whole affair. It was very cathartic. It allowed me to move on with my life. I was 14.

Twenty years later, I had quite a different motivation. I was working in the movie business as a sculptor for special effects, and had to read all the scripts of the movies I was working on. This instantly brought back those feelings of loss and regret. I thought, jeez, this stuff is really s**t, I can do better than this. Then a friend (at least that’s what he called himself) challenged me to do just that. I took to it with zeal and ended up with zilch. It was a dismal failure. Writing a screenplay turned out to be harder than it seemed. From that failed attempt, I was hooked. It probably would have been better in the long run if I’d been hooked on something a little more illegal, but there you have it. I became everyone’s public enemy #1. Since I had the most famous directors, actors, and producers at my disposal (as it were), I harassed them until they gave up their secrets of moviemaking. They were left with an uncomfortable choice: drop me in the Pacific with cement boots, or spill their guts to get rid of me. Luckily for me, they chose option #2.

What are you currently working on? Would you care to share a snippet?
I’m actually working on two things at once. (Don’t try this at home, kids) So, I’ll give you two snippets. One is a resurrected spy novel that takes place around the time the Soviet Union implodes. The other is a chick-flick screenplay. What? One has to have balance, right? I’ll leave you to figure out which is which.

Snippet #1:
The bullfrog surfaced, breaking the slimy surface of the pond only with its eyes. The black orbs swiveled, searching the immediate sky for food. The prey was there, buzzing about in erratic circles, but nothing flew within reach. After some time, the eyes sank back into the water. The ripples smoothed out to a mirrored reflection of the overhanging branches, robust with autumnal splendor…

Motion exploded in the forest as a contained blur of muddied green broke the still water, airborne. The frog landed, like metal to magnet, on the rotted leaf covered bank, and froze. The air vibrated, but nothing delectable came along. Its throat puffed and a croak barked into the damp air. No response. He moved his corpulent body a few degrees and set himself for another jump, thigh muscles taut. Its leap was high, legs extended. At mid-flight the prey was in sight. The mouth opened, tongue rolling out in a graceful flick. The flittering insect never saw the frog explode into shards of flesh and blood, but the resounding percussion of the old breach loader seemed to make it alter course momentarily.

The brush parted and Vasili Yanovitch Petrokov stepped to the edge of the muddy water to survey his handiwork. Scraps of bloody meat floated on the inky surface of the pond and spots of red glistened on the dying yellow leaves hanging from the low branches. A sour expression crossed the boy’s nine-year old face. It's too easy now, he thought, and there's never anything left to look at. He needed something bigger. Smarter.

Faith sits behind her desk in her Post-Modern, Hippie, Per-Raphealite office, a collision of styles much like her outfits. She's liberally sprinkling Perrier on her used-to-be white blouse, trying to blot out the coffee stain with Kleenex. A huge tissue pile is a soggy sculpture on her desk.

GEMMA (early 20's) sits across from Faith, totally bemused. Voluptuous to the nth degree, every move Gemma makes is sexy. She leans forward, cleavage jammed together.

GEMMA
You're in the wrong calling, dear. Astrology's not your thing, it's Vaudeville. Look it: today it's the spilt coffee on a potential suitor--

FAITH
He was an illiterate construction worker!

GEMMA
Yesterday it was setting your Fendi scarf on fire while attempting to toast an English Muffin, and the day before that you broke off the heel of your Prada flushing the toilet-for the life of me I can't figure that one out--

FAITH
(three octaves high)
You expect me to actually touch the handle of a toilet in subway station?

GEMMA
You're missing the point, my darling. I think you could take that show on the road.
Faith throws down her handful of tissues and jumps up.

FAITH
You'd better get out of here before I take you on the road!...or, whatever.

Laughing, Gemma scurries out of her chair for the door.

GEMMA
Don't forget, tomorrow night at Adam's. It's a surprise.

FAITH
A surprise? For who?

GEMMA
Well, if I told you that, it wouldn't be a surprise, now would it?

FAITH
Only if it's a surprise for me, Ms. Brainiac.

FAITH
What do you two have cooked up? It's nowhere near my birthday.

GEMMA
You didn't hear it from me.

FAITH
Hear what from you? You haven't said anything yet.

Gemma disappears down the hallway.

GEMMA
The folders with the new match potentials are on your desk. Maybe there's something in there for you.

Faith glowers at the empty doorway, then glances down to the now wet folders peeking out from under her sopping pile of tissues. She sinks back down in her chair, then scoops the tissue mess off the folders and into the trash can.

As she tries to peel the wet pages apart with one hand, she reaches under her desk with the other to turn on her computer. She reaches further and further, then looks down to see why she can't find it, but smashes her head against the desktop.

Do you include some of your own personal experiences in your books or do you prefer to use your imagination?
Finally, something I can answer. The answer is yes.

What genre do you typically write in and why did you choose this over others?
I typically write in paranormal, science fiction, thriller, action adventure, comedy, drama, mystery, romance, horror, fantasy, and speculative. I might have left something out. My real life isn’t in one genre, so neither is my fantasy life.

Do you have a specific process or a ritual you go through when sitting down to write?
I put my right foot in, them my left foot out, then I do the hokey-pokey and shake it all about. What? It works, you should try it.

Oh, you want to know the serious ritual? Okay, it’s this: Do everything you have to do before you sit down to write, then don’t get up for at least two hours. Then take care of any naturally occurring tendencies, and sit back down for another two hours. Repeat until eight writing hours have passed. Do this every day. Those with children and cats can adjust as appropriate.

Where do you find your inspiration for your plots? Do you have any tricks of the trade you would care to share?
Live a lot. I can almost always tell if a writer is writing from their head and not their heart, or from any kind of experience. Nothing trumps life experiences. Doesn’t mean you have to experience mayhem and murder, vampires or werewolves, Armageddon or space travel to write about it. But you do need to experience and understand human nature, and as a much emotion as you can handle.

When I first started writing, I couldn’t think of anything to write about either. But the more I wrote, the easier it became. I can find stories in just about everything. Why? Because stories are made up from what people do. Find your characters, and you automatically have your story.

Plotting stories comes from practice and learning the craft. I learned screenwriting. It’s all about structure, about plotting, about character and dialogue. It’s helped me immensely with writing novels. Want to be a better writer? Learn to write screenplays.

Now here’s the rub. No two people are going to interpret what you write in the same way. Nearly everyone knows this. You must endeavor to not let this bother you. Easier said than done. Case in point: The other day one of my screenplays won the best in category for an international writing contest. Yippie! The very next day the exact same script was trashed by another writing contest. It is life. The upside is, I can put “Tom the reviewer” into my next book or script and torture him to death. Mahahahaa!

What is the oddest place/situation where an idea for a book/plot has come to you?
Isn’t this a family blog?

What makes a book stand out and perk your interest?
Great writing. Compelling characters. Compelling storyline. Of course, a cover helps me to notice a book, and the blurb. If the blurb is written poorly, not only uninteresting, but bad grammar and sentence construction, I don’t go any further. I usually read the first page of a book I’m interested in. I can tell in one page if the person can write, and whether I want to read another three hundred pages if they can’t. Mostly, I know within a few lines. So many authors make the same basic mistakes, and it’s obvious within a few lines. It’s also obvious if they’re really good.

We all have our favorite authors. Can you share some of yours and tell us why you like them?
I like a lot of the Latin writers, like Gabriel García Márquezars (One Hundred of Solitude) Ye, Jorge Amado (Tereza Batista: Home from the Wars), and Isabel Allende (The House of the Spirits). I also like George R. R. Martin (Game of Thrones), and on another end of the spectrum, Ayn Ran (The Fountainhead)…too many others to name.

These folks write living, breathing characters who have their own voices, needs, and desires. It’s the insights these writers have into the human condition, which is all portrayed through their characters.

Thank you so much for joining me here today, Stuart. I know my followers will enjoy this spotlight as much as I have conducting it. Good luck on all your future endeavors.
Thank you, Harper. I enjoyed your company too. Especially the food. No, I mean I enjoyed the food equally as much. Well, I might have enjoyed it more if I knew what it was, and why it squirmed.


A LITTLE MORE ABOUT STUART 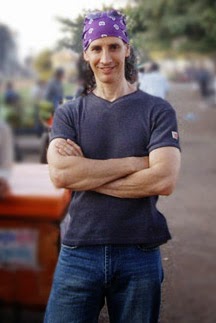 Stuart’s story ideas come from his vivid imagination, but his inspiration draws from extensive world travel and fascinating careers: from US military medic to hairstylist, then Washington D.C. Police officer to NYC photographer.

Later, he converted a chicken coop in the woods into a live-in studio and taught himself metal sculpture. That rudimentary craft expanded into the fine arts. Sculptures in bronze and fiberglass led to shows in the US, England and Thailand.

During Stuart’s film career, he learned screenwriting firsthand, writing over a dozen screenplays. To explore character and environment more, Stuart took up narrative fiction. He’s completed many short stories and five novels. His writing places high in contests and his screenplays are optioned.

He continues on the journey.


ONE OF STUART'S CURRENT RELEASES 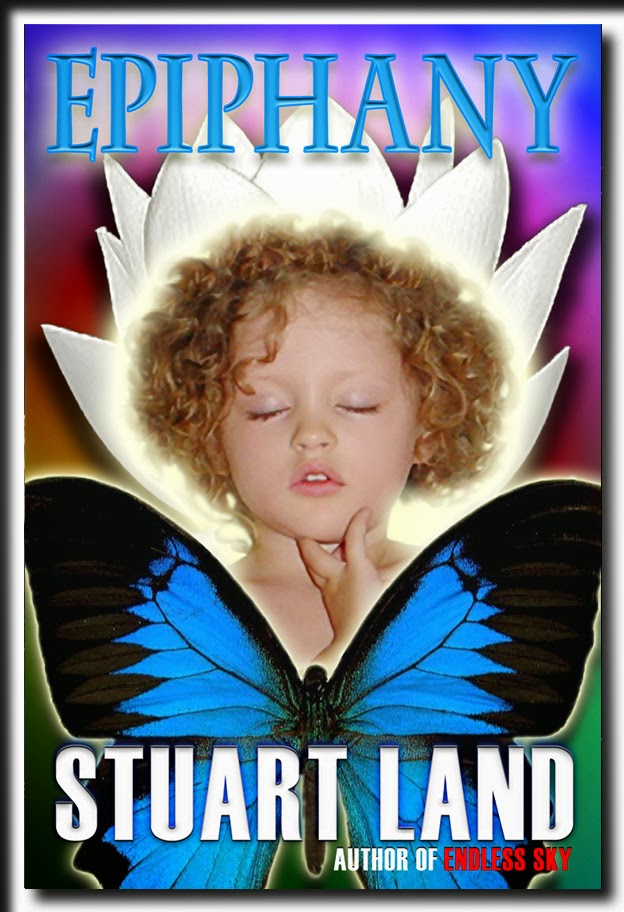 
STUART'S OTHER PUBLISHED TITLES INCLUDE